Chronic appendicitis is a rare medical condition. It can be difficult to diagnose because the symptoms may come and go, and they can also be mild. The most common symptom is abdominal pain. The likely cause is inflammation or an obstruction in your appendix.

The symptoms of chronic appendicitis may be mild. In some cases, abdominal pain is the only symptom with chronic appendicitis. The pain is usually in the lower right side of the abdomen. It may also appear near the belly button and move to the lower right side of the stomach in some cases. The pain can vary from sharp to dull, but it’s more common for it to be dull.

Other symptoms of chronic appendicitis include:

Some people might also experience nausea or diarrhea. Symptoms may come and go, which can make the condition more difficult to diagnose.

If you have any of these symptoms and they continue to become more severe, consider going to the doctor. They may be a sign of a serious medical problem. 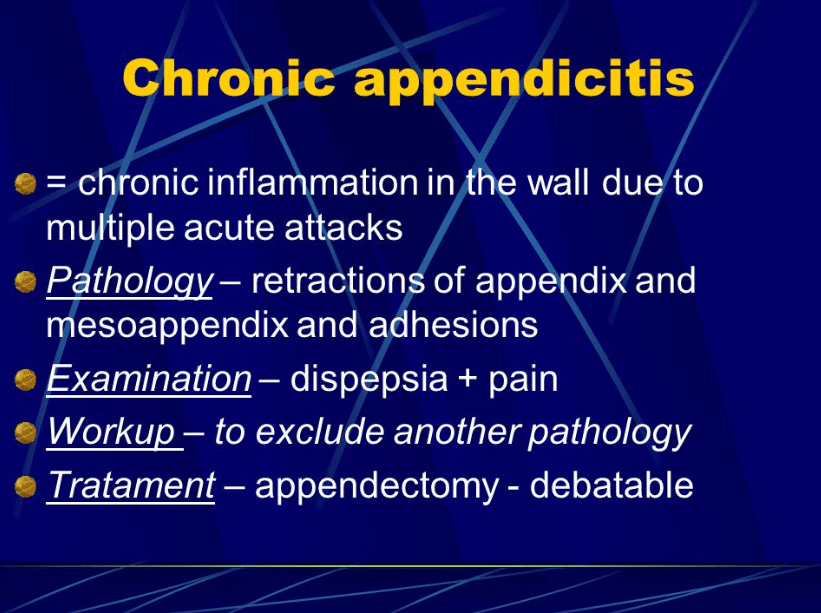 Chronic appendicitis can have milder symptoms that last for a long time, and that disappear and reappear. It can go undiagnosed for several weeks, months, or years.

Other symptoms of acute appendicitis include:

Appendicitis usually occurs when an obstruction, such as a foreign object or calcified stool, blocks the inner cavity or appendiceal lumen of the appendix.

appendicitis may occur when the appendiceal lumen is only partially blocked. However, the blockage is likely to worsen over time by causing pressure to build.

When this happens in people with appendicitis, the pressure may overcome the partial obstruction, and the symptoms will reduce in intensity or go away altogether.

The symptoms will then return the next time the blockage causes the appendix to become inflamed.

Chronic appendicitis may occur for many different reasons and many cases do not have a clear cause.

Often, appendicitis occurs due to inflammation and obstruction of the appendix. Other possible causes include:

A doctor will initially do a physical exam to determine whether the abdomen is tender and where the pain is located. They will also ask questions about the symptoms and a person’s medical history.

In most cases, a doctor will do several tests to rule out other medical conditions that have the same symptoms. 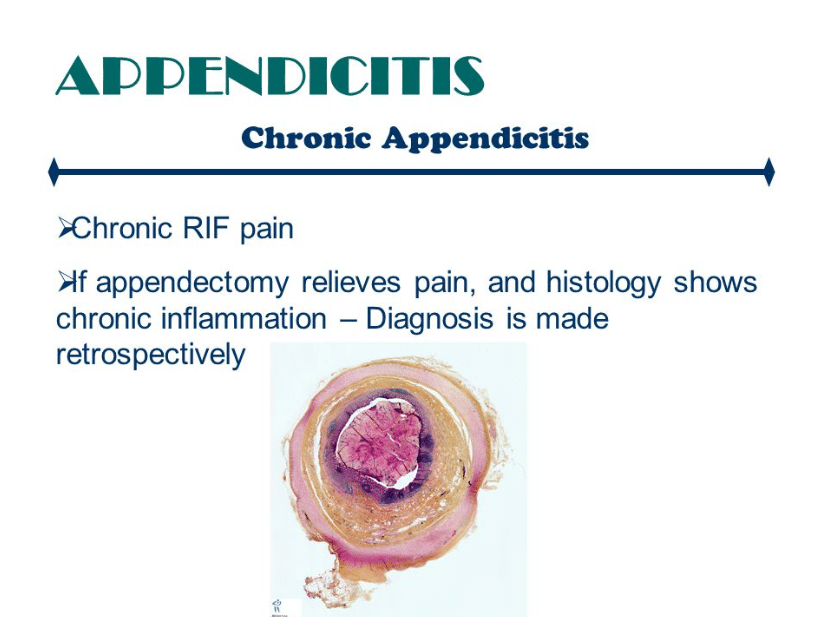 The conditions the doctor may attempt to rule out include:

The tests used to rule out these conditions include:

If appendicitis is diagnosed, the doctor may prescribe antibiotics or may advise draining the pus that has formed around the appendix due to the infection.

The most common treatment, however, is to have the appendix removed altogether. This surgery is called an appendectomy.

An appendectomy is usually performed using laparoscopic surgery, which is minimally invasive. It is also known as keyhole surgery and is performed under general anesthetic.